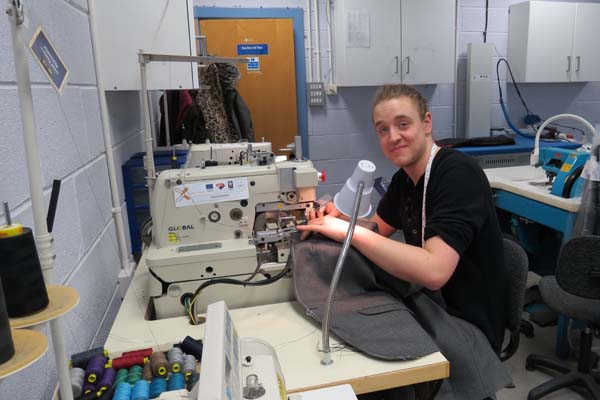 Lloyd Pearson, 22, had a very clear idea when he left college that he wanted to be a tailor but it was persistence and a strong work ethic that finally led him to the Textile Centre of Excellence in Huddersfield in 2010 to embark on a Level 2 Apprenticeship in Apparel.

“When I left college I didn’t want to get into debt and a degree course didn’t appeal as I wasn’t convinced that after three years I would have the work experience or options open to me,” said Lloyd. Leaving college, Lloyd did a variety of jobs from working in a call centre to a tumble dryer factory before a friend alerted him to an opening for an apprentice at the Textile Centre of Excellence. “I applied for the apprenticeship and for the next fourteen months, I was able to learn on the job and earn at the same time,” said Lloyd. “The vast majority of my friends went on to do degrees or are still doing them, whilst I’m working and earning. But more importantly, the apprenticeship has given me an insight into al the stages involved in the textile industry which has allowed me to find the areas I enjoy and where I can develop my skills.”

Lloyd’s advice to anyone considering an apprenticeship would be to have the willingness and enthusiasm and be prepared to work hard. Lloyd’s commitment to his chosen profession paid off when in March 2013, he represented the Textile Centre of Excellence at Admiralty House, London during National Apprenticeship Week.

Lloyd fully supports apprenticeships and recognises their vital role for the industry. “Apprenticeships built the industry in the first place and will keep it alive in the future,” said Lloyd. “They create jobs for people where they can learn in a workplace environment, helping them understand how each part of the process works. As an apprentice, you are an integral link between all the stages.”
Lloyd has completed his apprenticeship and moved from the studio into administrative side of the business where he is learning more skills. “Eventually I’d like to be a pattern cutter using the skills I learnt through the apprenticeship. I have no regrets in doing the apprenticeship and I’m excited about what the future will offer,” said Lloyd.